I went and watched Percy Jackson: The Sea Of Monsters last weekend simply because there was nothing else to watch. Among the choices in the cinema, it was the only urban fantasy movie. And me being an urban fantasy geek, this movie got picked. First off, I have to give kudos to the cinematographic team because they did a fantastic job! And the director, for seamlessly blending the 3D animation elements with the live actors/elements of the movie! The story though was a bit mundane and predictable. The plot wasn't bad. It was just that, the story could have been told better. But then again, this is a young adult (YA) story where the audience is expected to suspend disbelief a bit more than an ordinary story. Another thing which brought the rating of this movie just a tad down is Logan Lerman needs to practice a bit more on his acting if he plans on continuing on having an acting career because he is obviously not very good at it. Luckily, he is the only one out of all the main characters in the movie. However, after all that moaning.... at the end of it, for a movie chosen because there simply wasn't anything else better, it was good entertainment!

Cherry Rating: 4 out of 5 cherries 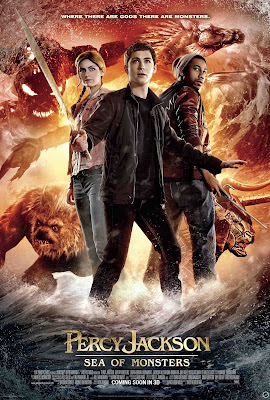 About Percy Jackson: The Sea Of Monsters:

In order to restore their dying safe haven, the son of Poseidon and his friends embark on a quest to the Sea of Monsters to find the mythical Golden Fleece while trying to stop an ancient evil from rising.

Starring Logan Lerman as Percy Jackson. Along with Alexandra Daddario and Douglas Smith. A Fox 2000 film. About The Sea of Monsters:

The heroic son of Poseidon makes an action-packed comeback in the second must-read installment of Rick Riordan's amazing young readers series. Starring Percy Jackson, a "half blood" whose mother is human and whose father is the God of the Sea, Riordan's series combines cliffhanger adventure and Greek mythology lessons that results in true page-turners that get better with each installment. In this episode, The Sea of Monsters, Percy sets out to retrieve the Golden Fleece before his summer camp is destroyed, surpassing the first book's drama and setting the stage for more thrills to come.

Source: Info in the About The Sea of Monsters was taken from GoodReads at http://www.goodreads.com/book/show/28186.The_Sea_of_Monsters.

Posted by Cherry Dragon at 04:34 No comments: