LORD OF THE FADING LANDS by C L Wilson 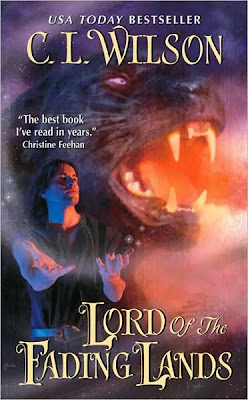 About Lord Of The Fading Light:

Long ago, in the magical holocaust known as the Mage Wars, the immortal Fey and their allies fought to defeat the grasping evil of the Elden Mages and their dark-gifted supporters. During those wars, in a fit of grief-induced madness caused by the death of his mate, Fey shapeshifter Rain Tairen Soul nearly destroyed the world in a blaze of tairen fire.

Now, a thousand years later, the fierce Fey king must fight to save his race from the brink of extinction and once again stop the evil rising in the homeland of his enemies, the Eld. The key to his success lies in the mortal city of Celieria, where the Mage Wars began, and with a young woman whose soul sings to him in ways no woman’s ever has, whose presence reawakens the primal fury of the tairen within his soul, and whose vast, untapped power can either save or destroy him and his people.

Source: Info in the About Lord Of The Fading Light was taken from the author's website at http://www.clwilson.com/books1.htm on 13/10/10/.

My Thoughts:
I first thought that this was a promising start to an epic fantasy. Then I came across Chris's review of the last book of this series which made me realize that all 5 books are just one long drawn-out story with cliff-hanger endings except for book 5. I didn't like that. I stopped reading this book. I was at chapter 7. I hate cliffhanger endings with a passion! Even if the author has such a good "voice". And this author does! The way she tells the story really appeals to me. Maybe when I haven't got a better book in my TBR mountain to read anymore (unlikely), I might pick this one up again. But as of now, I won't be recommending this series to anyone.

Books In This Series: