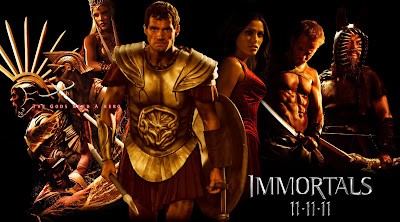 
Before the dawn of man or beast, immortals waged war against each other in Heaven. The victors declared themselves gods while the vanquished were renamed the Titans and imprisoned beneath Mount Tartarus. The Epirus Bow, a weapon of immense power, was lost on Earth during the war. In 1228 B.C., the mortal king Hyperion (Mickey Rourke) of Heraklion searches for the bow, intending to use it to release the Titans to spite the gods for failing to save his family. Hyperion captures the virgin oracle Phaedra (Freida Pinto), believing that she can use her visions to find the Epirus Bow's resting place.

In a small village nearby, the inhabitants prepare to flee to Mount Tartarus to avoid Hyperion's army. One inhabitant named Theseus (Henry Cavill) is a skilled warrior trained by his mentor the old man (John Hurt). Theseus and his mother Aethra (Anne Day-Jones), considered undesirables because Theseus was born from Aethra being raped, are forced to stay behind by Athenian soldiers including Lysander (Joseph Morgan). Theseus ably battles multiple opponents until the Athenian officer Helios (Peter Stebbings) intervenes and discharges Lysander from the army for his actions. Lysander travels to Hyperion, offering his service and the village's location. Hyperion accepts, but maims Lysander for being a traitor. Hyperion's forces attack Theseus' village, murdering the villagers and Aethra, and taking Theseus captive.

The old man is revealed to be Zeus (Luke Evans) where he meets with his fellow gods Athena (Isabel Lucas), Poseidon (Kellan Lutz), Ares (Daniel Sharman), Apollo (Corey Sevier), and Heracles (Steve Byers). Zeus warns them not to interfere in mortal affairs as gods where Zeus believes that until the Titans are released, they must have faith in mankind to defeat Hyperion. Theseus is enslaved alongside the thief Stavros (Stephen Dorff). Phaedra, who is held captive nearby, sees a vision of Theseus. Phaedra organizes a riot, using the chaos to escape with Theseus, Stavros, and the other slaves. Theseus decides to pursue Hyperion and attempts to capture a boat, but he and his allies are overwhelmed by Hyperion's forces. Poseidon purposefully falls from Olympus into the ocean causing a tidal wave that wipes out Hyperion's men. Phaedra sees another vision of Theseus standing near a shrouded body. She determines that Theseus must return home to bury Aethra.

While laying Aethra to rest, Theseus discovers the Epirus Bow embedded in nearby rock. He frees the Epirus Bow, but is attacked by Hyperion's henchman the Minotaur (Robert Maillet). Theseus kills Minotaur and uses the Bow to save his allies from being executed before collapsing from poisoned scratches inflicted by Minotaur. Phaedra tends to Theseus and later falls in love with him, stripping her of the visions she deemed a curse. The group returns to Phaedra's temple while Hyperion and his forces are away at Mount Tartarus. At the temple, Stavros and Theseus are lured into an ambush and Theseus loses the Epirus Bow. Outnumbered by Hyperion's men, Ares directly intervenes to save Theseus and Athena provides the men with horses to reach Mount Tartarus. Zeus arrives and angrily kills Ares for disobeying his command. Zeus tells Theseus that he and his allies will receive no more aid from the gods and he must justify the faith Zeus has in him alone. Before leaving with Athena, Zeus tells Theseus to prove him right. The lost Epirus Bow is brought to Hyperion.

Theseus, Stavros, and Phaedra travel to Mount Tartarus. Theseus tries in vain to warn Hellenics' King Cassander (Stephen McHattie) of Hyperion's plans, but Cassander dismisses his talk of gods as myth, intending to negotiate peace with Hyperion. The following day, Hyperion uses the Bow to destroy Mount Tartarus' seemingly indestructible wall killing Helios. Theseus leads the Hellenic army to war against the Hyperion forces, killing Lysander. Hyperion ignores the battle and storms through to Mount Tartarus killing Cassander. Hyperion uses the Epirus Bow to breach the mountain and free the Titans before Stavros and Theseus can stop him. The force of the release knocks the mortals down. Stavros takes the Epirus Bow and kills a Titan, but is massacred by the other Titans. Zeus, Poseidon, Athena, Heracles and Apollo arrive and battle the Titans while Theseus fights Hyperion. Zeus destroys the Epirus Bow with the Warhammer of Ares. The gods prove more powerful than the Titans, but they are overwhelmed by the sheer number of Titans with all but Zeus and Poseidon being killed. Theseus kills Hyperion and Zeus collapses Mount Tartarus on the Titans before ascending to Olympus with Athena's body and Poseidon. The collapsing mountain wipes out Hyperion's men. The mortally wounded Theseus is also transported to Olympus for his sacrifice and given a place among the gods.

Several years later, Theseus' story has become legend and Phaedra has given birth to Theseus' son Acamas (Gage Munroe). Acamas is met by the old man who informs the child that in the future, he too will one day fight against evil. Acamas sees a vision of the sky filled with gods and Titans fighting with Theseus amongst the combatants.

I like the premise of gods and humankind fighting for good versus evil. Hey, I am a fantasy geek! Anyway, so I bought this dvd. And of course because it was on sale at Asda's. The cinematography was quite good although a bit dark. I guess the darkness helps hides the imperfections. So I wasn't too fond of that. I could allow that some scenes might be in darker mode than others, but the entire movie in the dark?? Well, anyway, I still like the blending of magical elements with the actual live actors. Now the plot, Like I said I like the premise of gods and humans fighting for good, but, it was never properly explained why the rules are as they were. So what if somebody breaks the rules? What then? King Hyperion was evil so he has to be defeated, but I think he has the right of it to question the rules. If he wasn't evil, I would have rooted for him! To me things has to make sense. Not just it is so because the director says so. No, I don't buy that. It drops the rating of the movie a notch down.

This movie obviously has lots of fight scenes. One-on-one and mass battles, the works. I appreciate the acting abilities of the actors in making things look smooth and expert-like. What I don't appreciate is the logical-ness of the fight. Of course your opponent is going to point his blade to his own neck instead of towards the enemy?? WTF!! Yeah, the fight scene expert/coordinator of this movie needs to be shot!

Okey I have a few rants about this movie, but I can fast forward those bits which are annoying, so I still enjoyed this movie. I give it a rating of 3.5 out of 5 in entertainment value. 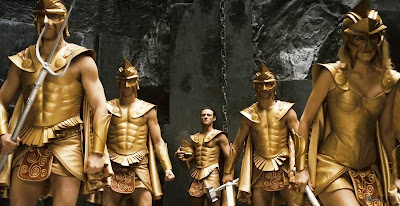 Overall Rating: 3.5 out of 5 cherries