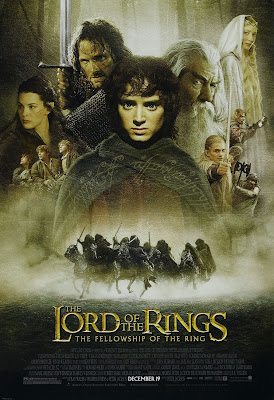 Lord Of The Rings: The Fellowship Of The Ring (2001)
Released by New Line Productions, a subsidiary of Warner Brothers and WingNut Films.
A star-studded affair including Elijah Wood, Viggo Mortensen, Orlando Bloom, Christopher Lee and Cate Blanchett to name a few. Directed by Peter Jackson.
Format: dvd

In the Second Age, the Dark Lord Sauron attempts to conquer Middle-Earth using his One Ring. In battle against the Elves and Men, Prince Isildur cuts the Ring from Sauron's hand, destroying his physical form and vanquishing his army. However, Sauron's "life force" is bound to the Ring, allowing him to survive while the Ring remains. Isildur, corrupted by the Ring's power, refuses to destroy it. When Isildur is killed by Orcs, the Ring is lost in a river for 2,500 years. The Ring is found by Gollum, who possesses it for centuries until it is found by the Hobbit Bilbo Baggins.

Sixty years later, Bilbo leaves the Ring to his nephew, Frodo Baggins. Upon learning that the Ring belonged to Sauron, the Wizard Gandalf the Grey warns Frodo that Sauron's forces will come for him. Gandalf catches Frodo's gardener Samwise Gamgee "eavesdropping" underneath a window and sends him with Frodo to leave the Shire. Gandalf rides to Isengard to meet with the head of his order, Saruman the White, who reveals that Sauron's servants, the Nazgûl, have been sent to capture the Ring. Saruman reveals himself to be in service to Sauron, and imprisons Gandalf atop his tower. Saruman commands Sauron's Orcs to construct weapons of war and produce a new breed of Orc fighters: the Uruk-hai.

While travelling to Bree, Frodo and Sam are joined by Merry and Pippin, and are nearly captured by the Nazgûl. At the Inn of the Prancing Pony, Frodo meets the mysterious ranger Aragorn, who hides them from their pursuers and agrees to lead them to Rivendell. During the journey they are attacked by the Nazgûl. Aragorn fights off the creatures, but Frodo is wounded by their Morgul blade, which will turn him into a wraith. While chased by the Nazgûl, Frodo is saved by the Elf Arwen who uses her magic to summon a surge of water that sweeps away the pursuing Nazgûl. Arwen takes Frodo to Rivendell where he is healed by her father, Elrond. Gandalf escapes Saruman's tower with the aid of Gwaihir the eagle and travels to Rivendell. Elrond calls a council of the races still loyal to Middle-earth to decide what should be done with the Ring. It is revealed that the Ring can only be destroyed by throwing it into the fires of Mount Doom, where it was forged. Frodo volunteers to take the Ring, accompanied by Sam, Merry, Pippin, Gandalf, and Aragorn. They are joined by the Elf Legolas, the Dwarf Gimli, and Boromir, man of Gondor, to form the Fellowship of the Ring.

The Fellowship set out but are hindered by Saruman's magic. They travel through the dwarf Mines of Moria. Inside, they find that Orcs have overrun the mines and slain the Dwarves; they also realise that Gollum is following them, determined to reclaim the Ring. The Fellowship is attacked by Orcs and a Balrog, an ancient demon of fire and shadow. Gandalf confronts the Balrog, allowing the others to escape, but both Gandalf and the Balrog fall into an abyss. Mourning Gandalf's apparent death, the group flees to Lothlórien, where they are sheltered by its rulers, the Elves Galadriel and Celeborn. That night, Galadriel informs Frodo that it is his destiny to destroy the Ring. The Fellowship continue their journey. Meanwhile, Saruman assembles a force of Uruk-hai to hunt the Fellowship.

After arriving at Parth Galen, Boromir gives in to the Ring's corruption and tries to take it from Frodo, believing that it is the only way to save his realm. Frodo manages to escape by wearing the Ring and becoming invisible. Boromir realises what he has done, and attempts to find Frodo, who decides to continue his journey alone, heeding Galadriel's warning that the Ring will eventually corrupt the other members of the Fellowship. The Uruk-hai arrive and Aragorn, Legolas, and Gimli attempt to hold them off while Frodo escapes. Merry and Pippin lead the Orcs away from Frodo and are nearly killed. Boromir tries to save them, but in the process is shot fatally by the Uruk-Hai leader, Lurtz. The Uruk-Hai capture Merry and Pippin. Aragorn slays Lurtz and tends to a dying Boromir, and promises him that the world of men will not fall. Boromir dies with Aragorn, Gimli and Legolas by his side.

Sam finds Frodo, who reluctantly lets Sam join him. Aragorn, Legolas and Gimli set out to rescue Merry and Pippin. As Frodo and Sam gaze out at the land before them, they grieve over the others. Frodo says that he is glad that Sam is with him and the two Hobbits set off towards Mordor.

Source: Info in the About Lord Of The Rings: The Fellowship Of The Ring was taken from Wikipedia at http://en.wikipedia.org/wiki/The_Lord_of_the_Rings:_The_Fellowship_of_the_Ring on 18/11/2012.

When I re-watched this dvd last night I was fresh from having just watched Immortals (2011) and I could appreciate the distinct difference between a well-done animated software combination with live actors cinematography and one which is not. Lord Of The Rings (LotR) is obviously well-done. It wasn't dark all the time to hide imperfections. And it made a world of difference in the watching experience! I have to say that Peter Jackson did a pretty good job! I heard that he is a stickler to details. And it paid off. It made the difference between a 5 out of 5 movie and one which is a 3.5 out of 5.

Both films (LotR & Immortals) have numerous fight scenes. Both in a one-on-one kind and mass battles. One of my complaints in Immortals is that their fight scenes were not quite realistic, though I have to give it to the actor that the moves looked smooth. Still ridiculous. None of that ridiculous fight scenes can be found in the LotR. Even after a few re-watches, I could not find one. Maybe the director of Immortals should have hired the fight scene expert/coordinator in LotR.

I also have to give a nod to the actors for doing very well! None of them was like Kristen Stewart whose "sad face", "shocked moments" and "sad performance" all looked the same. I have to give it to her though, she is pretty, but she can't act. The actors and actresses in LotR were not only "lookers", but they can act! Sure, I have a few nitpicking issues, but, I can forgive those for the wonderful movie time I got out of this film. Suffice to say that I really enjoyed this film and there will be more re-watches in the future and looking forward to watching The Hobbit: An Unexpected Journey (2012) in December!

Overall Rating: 5 out of 5 cherries

Movie Trailer of The Hobbit: An Unexpected Journey (2012):